Apex predators can create niche space for subordinate guild members by decreasing the abundance of competitively dominant species, supplying carrion for scavengers, and by non-consumptive (fear) control over dominant meso-carnivores. Given strong interspecific competition among carnivores, we often see divergent space use, habitat selection and foraging between members within the guild. Such niche partitioning helps to alleviate competitive interactions and allow the co-occurrence of multiple carnivore species. It is crucial to understand the mechanisms by which apex carnivores shape carnivore communities and how their presence can lead to coexistence between dominant and subordinate meso-carnivores, especially with the uncertain future of apex carnivores. 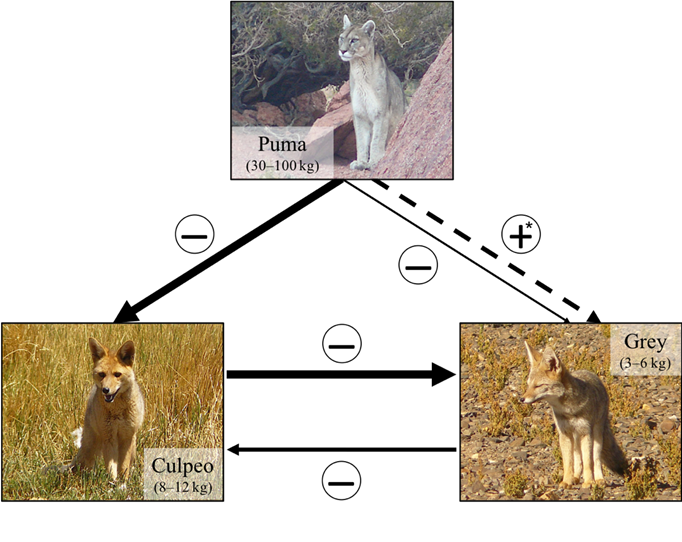 Our study site is Laguna Blanca National Park, Neuguen, Argentina. The region is a dry steppe characterized by grassland and shrubland communities, with glacial-remnant lakes interspersed throughout. Pumas are the dominant carnivores in the system while cupeo and grey foxes are the dominant and subordinate meso-carnivores, respectively. We hypothesize that apex predators stabilize meso-predator communities by reducing competition between co-existing meso-carnivores. Specifically, we predict a behaviorally mediated cascade from pumas to culpeos and down to grey foxes due to the culpeos spatiotemporal avoidance and fear of falling prey to pumas.

To explore the interactions of these three guild members, we are using camera trap surveys to assess habitat preferences and diel overlap by the two fox species. By using occupancy models, we will test how pumas affect each species’ occupancy and detection probability, and how pumas affect co-existence. In addition, we are using a combination of scat and stable isotope analysis to study the dietary preference and overlap among these three species. This community is well-suited to study the interactions of carnivore guilds because of its simplicity and that the relative strength of interactions between members should be strong.

This work is funded by UW-Madison and CONICET, Argentina.

Pauli lab in the news

Beneath the snow, a fascinating endangered ecosystem- Reporterre

Subnivium: The secret ecosystem hidden beneath the snow – New Scientist

The snow season is shortening in Wisconsin, forcing the snowshoe hare north in search of a landscape to blend into – Milwaukee Journal Sentinel